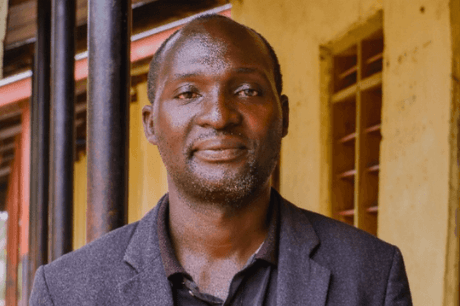 Michael Oscar, 43, a teacher at Chenge secondary school in Bariadi, Simiyu region in Tanzania, is one of the 435 teachers trained through the Uzazi Uzima (Kiswahili for “Safe Deliveries”) project on sexual and reproductive health and rights as a school youth counsellor.

“First and foremost, I would like to thank Amref for bringing the Uzazi Uzima project to our school,” he says.

Before Uzazi Uzima, teachers like Michael were limited to providing students with education on sexual and reproductive health and rights as outlined in the school syllabus.

But with the initiation of Amref’s project in 2017, things started changing for teachers, for the better.

“Around February 2018 Amref started educating teachers. Health teachers were trained for six days and after that we came to school to teach students what we had learnt,” he says.

Teachers formed school clubs with student peer educators to share sexual and reproductive health information with their fellow students. They also set up a suggestion box where students who were shy could write down their questions to be answered. Each week, there is a 40-minute peer session where ideas are exchanged about various issues concerning reproductive health, sexually transmitted infections, teenage pregnancy and other vital topics.

Michael attributes this drastic reduction in the number of pregnancies among school girls to education in sexual and reproductive health.

“Students are self-aware. They know their menstrual cycles and are well informed about what happens at puberty stage. They know the effects of harmful traditional practices like early forced marriages. We used to have cases of students being forced into marriage, but such cases have reduced,” Michael says.

According to Michael, most girls complete school now, unlike in the past when most of them dropped out of school due to pregnancies or early marriages. To Michael, this means that the project should be sustained to create a life-long impact among the adolescents.

“Although teachers are still doing their best in ensuring that the education continues and sustains, we still need assistance from outside. The government, through the health ministry, can assist to ensure that sexual and reproductive health is prioritized and emphasized in school. We need to keep these efforts so that the coming generation is well equipped with sexual and reproductive health,” he says.

Michael says the school still lacks tools for teaching, such as projectors, and other teaching aids like models. The students also have to scramble for the limited guideline manuals and textbooks as there aren’t enough for all students. Michael says that there is a need for more education in order to reach to as many students as possible.

Training teachers in sexual and reproductive health and rights is one of the key activities of the four-year Uzazi Uzima project, a partnership among Amref Health Africa and Marie Stopes, with Deloitte as a service partner. The Government of Canada, through Global Affairs Canada, is supporting the project with $10.2 million.

Your MAMATOTO Gift today will have 5X the impact!

Powered by Convert Plus
Go to Top