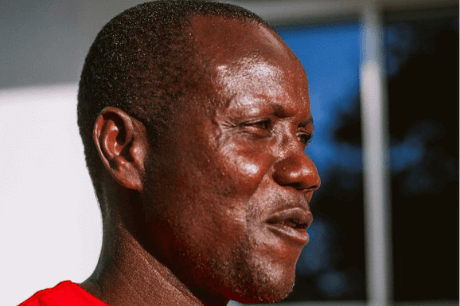 Marko Maguta, 44, a Community Health Worker (CHW) from Mwasamba Village at Bariadi in the Simiyu region of Tanzania, is one of the 800 CHWs trained through the Uzazi Uzima (Kiswahili for “Safe Deliveries”) project on Reproductive, Maternal, Newborn, Child and Adolescent Health (RMNCAH) services.

He received training between 2017 and 2018, and since then, he has never looked back. Indeed, the training he and others received has been of great importance. “I’m so grateful to Amref’s Uzazi Uzima project. The training led to an increase of pregnant mothers coming to deliver at Mwasamba Health Centre, from 8 per month before the training to 24 per month after the training,” he says.

“In addition to training CHWs, Amref also constructed a labour ward, equipped for the mother and child. This has also resulted in an increased number of patients attending Mwasamba Health Centre. Previously, many mothers did not feel comfortable giving birth at the health centre due to the large number of patients that populated one building,” he says.

Amref also provided water service to the health centre, which has greatly improved the birthing process.

“Before Uzazi Uzima intervened in providing water, we used to tell relatives or those accompanying the pregnant mothers to carry water since the health providers can’t leave the patients and fetch water,” he says.

Marko insists that the Uzazi Uzima project has greatly helped to increase the number of patients at Mwasamba health centre. According to HMIS data, the facility had 128 deliveries annually (2017). Due to the improvement of infrastructure and services provision, the number of deliveries in the facility reached 283 by December 2020, an increase of 47%.

In order to facilitate their work, the Uzazi Uzima project provided CHWs with tools, such as bicycles, gum boots [rubber boots], and coats. The training of CHWs equipped them for work at the community and health centre. But it also helped them to know a number of important issues related to safe delivery.

“The training helped me to understand the fact that it is important to escort a pregnant mother to the health centre,” says Marko.

Before the training, Marko, along his other CHWs, did not take escorting mother to clinics seriously. Yet, according to Marko, escorting the mother to the clinic helps to know her health history, such as that of heavy bleeding, blood levels, or the need for referrals to the district or regional hospitals.

As a result of the CHW training, there has been a great positive shift concerning RMNCAH. The capacity building of CHWs has helped the community at large learn the benefits of giving birth in health facilities and to attend the pre- and post-natal clinics. Previously, women would give birth at home or at the homes of traditional health attendant, which put pregnant women at greater risk of dying during delivery due to complications. Through project interventions involving CHWs, it was noted that there is increase by 10% in the number of clients who received antenatal care four or more times during their pregnancy, known as ANC4, by December 2020 which resulted in a 15% increase in deliveries occurring at health facilities supported by the project.

Marko is grateful to the Uzazi Uzima project for enabling him to improve the way he works.

“I have been able to organize and identify households with pregnant and breastfeeding mothers,” he says, before adding: “This has helped to simplify my work as I arrange days for visiting households based on the two categories. For the case of breastfeeding mothers, I aim at educating them about nutrition while the case of pregnant mother the aim is to educate them about nutrition, attending pre-natal clinics as well as going through the delivery work plan which consists of the type of hospital the pregnant mother should deliver from and who should supervise the delivery.”

Training of community health workers is one of the key activities of the four-year Uzazi Uzima project, a partnership among Amref Health Africa and Marie Stopes, with Deloitte as a service partner. The Government of Canada through Global Affairs Canada, is supporting the project with $10.2 million.