Aneles Lubagumya: New operating theatre at our hospital in Tanzania is saving lives

Previous Next
Aneles Lubagumya: New operating theatre at our hospital in Tanzania is saving lives 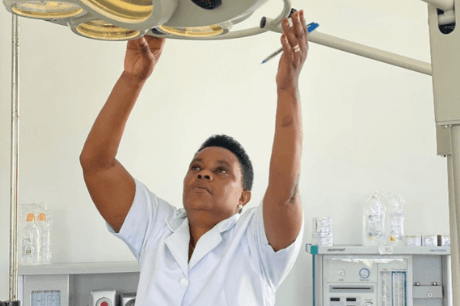 Aneles Lubagumya, 43, has been a nurse at Mwandoya Hospital in Meatu District, Simiyu region in Tanzania, for more than 15 years. She says that great change that has been enabled by Amref’s Uzazi Uzima (Kiswahili for “Safe Deliveries”) project.

Mwandoya Hospital is one of the facilities supported by the project and it benefited from the construction of an operating theatre, a youth-friendly corner for specialized health services for young people and infrastructure for water, sanitation and hygiene. Mwandoya Health Centre is now able to conduct up to 14 Caesarian sections per month, compared to a maximum of 2 or 3, previously. This means more pregnant women can get the potentially life-saving operation they need when they need it.

According to Aneles, the operating theatre has greatly improved the provision of maternal services at the health centre. One of the obvious benefits has been an increase in the attendance of mothers seeking health care.

“Initially, the theatre we had was not enough because there was only one bed; during operations you had to wait for hours until the patient gained consciousness before transferring the patient to the ward which had other patients who have already been treated,” she says. 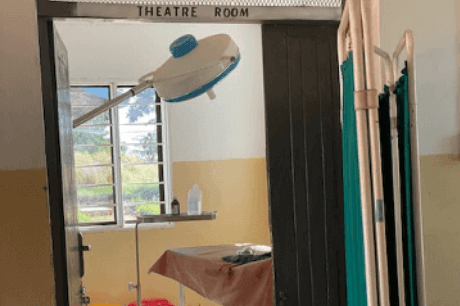 The new operating theatre has been equipped with lights, two beds and incubators that provide heat to the newborn babies when necessary. Aneles says the theatre also has two blood machines, which help to ensure provision of services at any time and improve the overall quality of the health services.

“We used to only treat one patient per day but today we are able to treat three patients in a day without any worries because our theatre building is big and we can treat our patients and put them in the specific rooms,” she says.

The conducive environment of the operating theatre is one of the motivating factors for health workers like Aneles who, before the project, used to cram in one room with hardly enough ventilation.

“With this theatre we have well-functioning air conditioners which weren’t there previously. The rooms are spacious enough with enough windows,” she says.

The new building means that patients are now not getting infections unlike in the past. More importantly, the construction of the operating theatre has helped to reduce newborn and maternal deaths at the health centre. “Last year, for instance, we didn’t have deaths,” she says which shows improvement compared to two maternal death in 2018.

The number of mothers coming to deliver at the hospital has also increased. This has been attributed to the recruitment of more health service providers at the health centre. There has also been a reduction in the number of deaths among infants. In 2019 the facility had 19 perinatal deaths. In the first six months of 2021, however, the facility reported 4 perinatal deaths.

Amref’s Uzazi Uzima project also sponsored one health worker to study anesthetics and sonography in order to provide better emergency care to pregnant women and newborns. Aneles says that this training has also helped to prevent the deaths of mothers and newborn babies.

Among the notable results of the project is the ever-increasing number of patients coming to the hospital. “We can attend to 7-10 patients [pregnant women] on a given day, including undertaking between 3-4 operations [C-sections].” she says.

Because of the new spacious theatre building, the health facility has provided medical help for bordering districts and neighbouring regions as it receives patients that initially used to have travel to regions as far as Arusha and Singida in order to get the health services they needed.

These activities at Mwandoya Hospital are part of the four-year Uzazi Uzima project, a partnership among Amref Health Africa and Marie Stopes, with Deloitte as a service partner. The Government of Canada, through Global Affairs Canada, is supporting the project with $10.2 million.