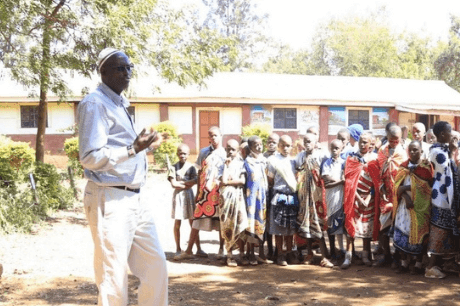 Meet Denge Lugayo, 56, a Project Manager with Amref Health Africa in Kajiado County, Kenya. Denge is the father of four daughters. In his community, it is tradition for pre-teen or teen girls to undergo female genital mutilation/cutting (FGM/C) as a rite of passage to womanhood. As a father, Denge did not want his daughters to be subjected to FGM/C.

We asked Denge a few questions to find out more about his decision, and his work with men and fathers to end FGM/C. (This interview has been edited for length and clarity)

What motivated you, as a father, to decide your daughters would not be subjected to female genital mutilation/cutting (FGM/C)?

“When I was a young and newly employed in 1992, we had a neighbour (a young woman) who after her first childbirth was leaking urine because she had an obstetric fistula [a hole in the birth canal often caused by obstructed or prolonged labour without adequate medical care]. Everybody in the village looked down upon her. She was very stigmatized. The young woman was later divorced by her husband. A few years later, I came across AMREF Flying Doctors doing operations on fistula, talked to the team leader, and requested him to help the woman get access to surgery to correct the problem. The doctors gave me the next scheduled operation flight to Marsabit hospital. I went home, quickly mobilized my neighbours to raise some funds for the woman to travel to the hospital, 200km away, for the much needed fistula surgery. Two years later, I met the same woman again and she was very happy, not leaking urine anymore and happily remarried.

There is something else she told me, and I quote: “I developed fistula because of the incisions the traditional birth attendant performed on me during delivery because my baby couldn’t come out due to scarring in my genitalia after going through FGM/C at a tender age of 14 years.”

That is the day I made the decision and said NO to FGM/C on my girls. This decision also made me move my career from WASH [water, sanitation and hygiene] programmes to RMNCAH [reproductive, maternal, newborn, child and adolescent health], where I have worked for the last four years in championing the rights of girls and women in saying no to FGM/C.”

How old were your daughters at the time the decision was made?

How did other fathers and men in your community react when you decided you did not want your daughters subjected to FGM/C?

“At first, they didn’t welcome the decision, but I stood my ground. Whenever I get the opportunity to meet with men/fathers I openly talk about the negative effects of the outdated traditional practice. Slowly, I am seeing changes with many fathers joining the network. I immensely contributed to Koota Injena (“Come, let us talk” in the Borana language) project in Marsabit and Samburu counties in Kenya of engaging clan elders, who are men and fathers, in denouncing FGM/C. I believe that with sustained awareness and community education we can win the fight.”

What do you say to fathers and young men who are not yet fathers about why they should not have their daughters undergo FGM/C?

“I remind fathers and young men that FGM/C is illegal in Kenya, that it dehumanizes a girl or woman, that is a violation of their human rights, and that it disempowers girls and women and denies girls the opportunity to continue their education and become the women of their dreams.”

Tell us about some of the lessons you have learned working with men and fathers to end FGM/C.

“In the communities I work with in Kenya to end FGM/C men are the custodians of culture so they need respect and need to be involved when discussing cultural norm change in the society. To engage them, they require well-structured dialogues where men are meeting alone. Most men seem not be aware of the negative health effects of FGM/C so sharing this information with them is very important.”

What are some of the challenges you still face in your work with men and fathers?

“Most men still say FGM/C is not their business; that it is women who cut girls so it is women’s business. Men in leadership positions fear publicly denouncing FGM/C for fear of losing their positions or elected seats. Men are captive to cultural norms and may fear change because of the unknown.”

Why do men and fathers need to be involved in the work to end FGM/C?

“Men in my community and the communities I am working with to end FGM/C are the custodians of culture so changing traditional practices, like FGM/C, won’t happen without them. Also, men are the decision-makers at the family level. A woman will consult her husband before cutting her daughter. Men own and control the resources at the family level. In my community when a girl is cut the father slaughters a goat or sheep so that she feeds well and heals faster. He is the owner of livestock; it’s him who makes the decisions about who should go school or how many livestock should be sold to pay school fees for his children. So, men must be involved in order to change their mindset about the role of girls and women in their communities for lasting change to happen.”