The Fight Against Gender-Based Violence: A Male Agent of Change in Kenya

Previous Next
The Fight Against Gender-Based Violence: A Male Agent of Change in Kenya 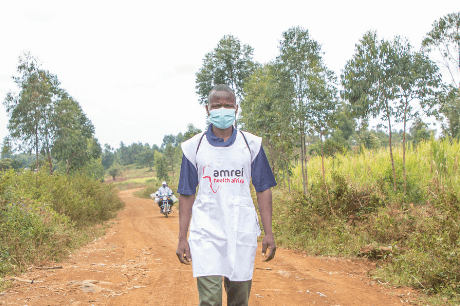 Contemplative and eloquent, Justus Hassan, 36, is a father of three from Wang’chieng village, Migori County in Kenya. He has volunteered to fight sexual and gender-based violence (SGBV) alongside preventable diseases in his community. He is enthusiastic about his ability to help survivors of SGBV as it gives him great satisfaction.

Justus reports cases of sexual assault and other forms of gender-based violence and ensures the survivors get medical treatment and follow-up care. He also takes up the legal processes as part of his support for survivors in their quest to justice.

He is one of the 1,062 Community Health Workers (CHWs) trained by Amref Health Africa on the management of SGBV-related cases in his community. With funding from the Government of Canada through Global Affairs Canada, the program’s objective is to empower health workers and CHWs with the right forensic knowledge, which is vital in responding appropriately and professionally to women and girls exposed to SGBV. “It was an eye-opening training, because post- and pre-care of victims is very important when dealing with the cases. This was emphasized during the training,” says Justus.

Justus notes that the COVID-19 pandemic has caused an increase in the cases of violence against girls and women due to the curfews and travel restrictions imposed by the government. “With the curfew, many victims could not go to the hospital on time,” he says.

It is not an easy task dealing with the cases and educating his fellow men and boys. However, he says that involving men in fighting SGBV is an important step in eradicating the cases. As a leading champion, he is positive that his voice and efforts will positively impact the lives of women and girls at risk. “When I meet other men, we discuss our views on gender-based violence and explore possible solutions for the problem in our community,” he explains.

His work has challenges. Justus notes that he faces resistance from his male counterparts, and custodians of culture. In some instances, families affected are compelled into using traditional means of solving cases, which denies survivors the opportunity to pursue legal recourse. According to Justus, communities resort to informal law where decisions are made by relatives. “Sometimes it is difficult to convince a survivor to go to court when the perpetrator is the father or a close relative,” he explains. “Most times, they end up solving the case within the family structure.”

Additionally, insufficient information on the available SGBV services and where to seek support at the community level hinders timely access to post-care services for survivors. Despite many challenges, Justus puts the needs of his community first and remains committed to preventing and responding to cases of violence against women and girls.

According to the 2019 Policy on SGBV in Migori County, violence against women and girls manifests in various forms including: rape, defilement, incest, sexual exploitation and abuse, female genital mutilation/cutting (FGM/C), domestic violence, forced widow inheritance, child marriage among others.

“Most women and girls are unaware of their rights and depend on family members to make decisions on their behalf. Therefore, it is my duty to educate them so that they can make informed choices,” says Justus.

CHWs are crucial in supporting women and girls who experience any form of violence. Many times, they are the first point of contact for survivors.

“Dealing with SBGV requires a holistic approach; you cannot do it alone. It involves many stakeholders drawn from the health sector, law enforcement and Judiciary,” said Celestine Achieng, sub-county SGBV Coordinator at Uriri sub-county. “The starting point for SGBV cases is at the community, therefore, CHWs play a vital role because they spend most of their time in the community. Many times, the CHWs identifies the victims and quickly refers them to the facility linked to them.”