Veronica Masomeke: Talking about sexual and reproductive issues was a taboo

Previous Next
Veronica Masomeke: Talking about sexual and reproductive issues was a taboo 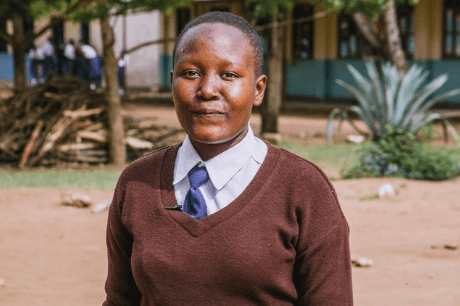 Veronica Masomeke, 17, is a form four student and a peer educator at Chenge Secondary School in Bariadi District in the Simiyu region in Tanzania. She is one of the 1,356 adolescents and young people trained under the Uzazi Uzima (Kiswahili for “Safe Deliveries”) project on sexual and reproductive health and rights (SRHR). The first time she heard the word ‘sex’ being uttered in public was during her biology class. Like many adolescents, she had grown up to believe that discussing or talking about sexual and reproductive issues was a taboo.

“Growing up as a student since primary school, I was not much aware of the sexual and reproductive health rights education. It’s only during the science lesson where teachers talked slightly about the reproduction system; but, various topics on sexual reproductive health and rights were not offered in class,” she says.

To worsen the situation, health facilities did not do much either. Provision of SRHR services at health facilities was mixed with general health services, leaving many young people and adolescents without access to much-needed sexual and reproductive services. Parents also frowned upon teaching their adolescents about SRHR for fear that they would get exposed to sexual practices at an early age. Given this situation, there were many cases of early pregnancies.

“In one year, we would have between 10-15 girls getting pregnant. There were also many cases of early marriages, and poor school attendance by the girls,” she says.

Now, Veronica, and young people trained through the Uzazi Uzima project on SRHR, notice a big change. To Veronica, the project has helped to reduce the number of pregnancies in her school and girls are now able to abstain from sexual activities, something that has increased girls’ school attendance.

Since becoming a peer educator, Veronica has reached out to more than 300 peers, both in and out-of-school. Some of the topics that Veronica teaches about include puberty, menstruation, prevention of teenage pregnancies, family planning, sexually transmitted infectious diseases like HIV/AIDS, and self confidence among girls.

“One of the benefits of the project has helped to build their confidence,” says Veronica.

Youth also get various types of referrals, including those on SRHR, where young people can access youth-friendly health services at their special corners, or centres. It is at these centres that young people like Veronica are able to meet and connect. These corners also offer them utmost confidentiality, compared to the previous situation where young people could only access services through the general ward along with adults. Youth are able to receive treatment and medication privately without other students knowing. The youth-friendly corners have also built their confidence, improved their health, and made them to achieve their dreams. During the Uzazi Uzima project, between 2016 and 2020, 16 youth-friendly corners were built and renovated in Simiyu Region, 1,356 peer educators were trained and 4,797 adolescents accessed services during the lifetime of the project.

Veronica still feels that there is more need to reach out to her peers in the streets who have no knowledge about SRHR.

“This could be done by sending more representatives in the streets to educate people, ensure that everyone has SRHR knowledge,” she advises.

Training of peer educators on sexual and reproductive health and rights is one of the key activities of the four-year Uzazi Uzima project, a partnership among Amref Health Africa and Marie Stopes, with Deloitte as a service partner. The Government of Canada through Global Affairs Canada, is supporting the project with $10.2 million.