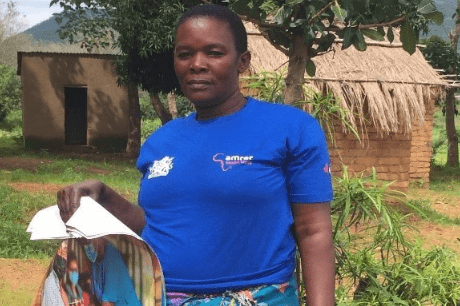 Jessie Nyondo, a 43-year-old widow with five children, is a gender champion in Malawi. She lives in Traditional Authority (T/A) Mwabulambiya in the Chitipa District. Jessie and other community members received training to help respond to and prevent sexual and gender-based violence (SGBV) in her community, which has increased during the COVID-19 pandemic. With financial support from the Government of Canada through Global Affairs Canada, training was also carried out in the districts of Ntchisi, Mangochi, Machinga, Zomba and Chikwawa.

Jessie was selected to receive the training provided through the COVID-19 Response project by the Area Development Committee (ADC) in her community. “One morning, I received a phone call from the ADC chairman who informed me about my selection to be a gender champion/ambassador for my area,” she says. She did not hesitate to accept this challenging role.

Jessie notes that coordination among stakeholders at the community and district levels is essential in the fight against SGBV. She says traditional leaders play an important role in preventing and responding to SGBV as they provide the gender champions, like her, with space to address the village gatherings whenever traditional leaders conduct community meetings as well as support the reporting of SGBV cases to relevant authorities.

“Like any other work, being a gender champion brings with it a number of challenges including harassment by some community members, mainly when they get drunk. However, this is now a thing of the past as they also support us in our work as well as seek support from us,” Jessie says.

The SGBV cases have gone down in her area due to the work that gender champions are doing. “Many people, including married couples, have stopped committing SGBV in my area,” she says.

Together with her fellow gender champions, Jessie has also rescued a number of children from child marriages and returned them to school.